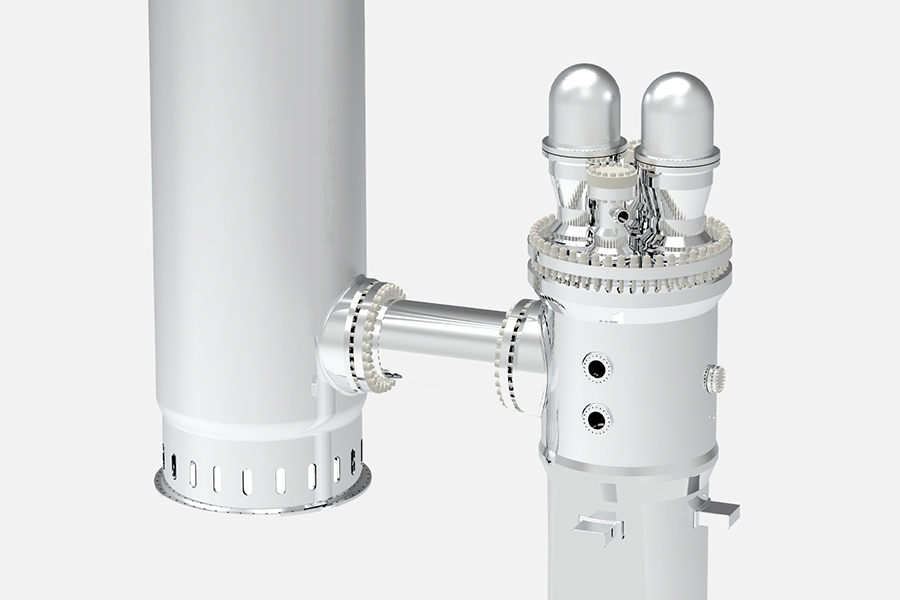 J. Clay Sell had two main goals when he visited the Tri-Cities in October to participate in Energy Northwest’s annual conference in Kennewick.

Sell, chief executive officer of X-energy, came to discuss a government-backed partnership that will bring a fourth-generation nuclear plant to the Energy Northwest campus north Richland.

Sell spent his visit pitching his company’s high-temperature, gas-cooled technology to utilities looking for carbon-free power sources. He also had a message for Tri-City residents about the company’s 320-megawatt Xe-100 plant, to be sited next to the towering Columbia Generating Station beside the Columbia River.

It is safe, simpler to build and operate, and will be a great neighbor, he pledged.

X-energy, Energy Northwest and Grant County Public Utility District plan to begin generating power by 2027 after the Xe-100 was selected as one of two pilot technologies by the U.S. Department of Energy for its multibillion-dollar Advanced Reactor Demonstration Project, or ARDP, program.

The other is Bellevue-based Terra Power, another Energy Northwest partner. The ARDP program included $80 million in initial funding and a seven-year, $3.2 billion timeline to bring the new power technologies to fruition.

Terra Power, led by Bill Gates, chose Kemmerer, Wyoming, for its site. X-energy, based in Rockville, Maryland, is building in Richland at what is known as Site 1.

“We are as committed as we can be at this time,” he said.

During his visit, Sell and his staff led visitors through a mockup of the computer stations where operators will control the Richland plant and the others that follow.

Technology makes it simple to control and to construct the building. X-energy’s continuing mission is minimizing staffing needed to run its plants.

The Tri-Cities greeted the ARDP awards with enthusiasm when word came out a year ago. Energy is a cornerstone of the local economic development efforts and nuclear technology is one of the region’s core competencies.

Not everyone agrees it should stay that way. In September, the Columbia Riverkeeper issued a report saying additional nuclear reactors in the Mid-Columbia should be a “nonstarter” until there is a plan to address waste. The Confederated Tribes of the Umatilla Reservation objected to small modular reactors in August. (See related story  here).

But Sell’s task was to explain his company’s technology and what led it to Richland and Washington state. Its gas-based technology and its pebble-bed fuel systems won’t ever experience meltdowns.

“The reactor is intrinsically safe,” he said.

Sell said his company was lucky to be selected for the partnership with Energy Northwest.

“They could have had anyone they wanted,” said Sell. “I wasn’t at the forefront.”

It took just five months to reach an agreement and apply for ARDP – bureaucratic light speed. The process began under CEO Brad Sawatzke, who has since retired, and continues under his successor, Bob Schuetz. (See Q&A, Page A19).

From his perspective, Energy Northwest brought the right combination of a great site, operational expertise and a local culture that is generally supportive of nuclear energy and eliminating carbon from electric production.

He praised U.S. Rep. Dan Newhouse, R-Sunnyside, for championing ARDP in Congress, where it originated. He praised the Trump Administration, which was in office when the awards were made, and the Biden Administration for its continuing embrace of small modular reactor technology.

He praised Washington state for its commitment to carbon-free energy by 2045, codified in the 2019 Clean Energy Transformation Act.

“Washington state is on the vanguard,” he said.

Site 1 is an attractive location, he said. It is part of the complex where Energy Northwest, then known as the Washington Public Power Supply System, once intended to build a fleet of traditional nuclear plants. It built just one and famously defaulted on the bonds it issued to pay for them.

It is licensed, has utilities and access to a community with a deep well of expertise with nuclear technology. And unlike other licensed sites, it is owned by an existing utility. It would take too long to bring a green site through the process to meet the 2027 deadline imposed by the ARDP.

No other potential site in the country is better set up to meet the 2027 deadline, Sell said. There are other NRC-licensed sites, he added, but none is controlled by a utility. Even better, the Tri-Cities is rich in nuclear expertise, from trades and crafts to engineers and established supply chains.

“That’s how we ended up here,” Sell said. “This community gets nuclear power.”

Energy Northwest and X-energy signed up their first utility partner in early 2021, when Grant County Public Utility District signed on as the plant’s owner and buyer of the energy it will produce. The TRi Energy Partnership formed in April and was announced at a ceremony rich with nods to the region’s atomic history.

Energy Northwest brought in the lectern used by President John F. Kennedy during a Sept. 26, 1963, visit to preside over the groundbreaking for the fission-powered Washington Electric Generating Plant.

Grant County has a growing demand for power as it caters to data center and other development. CEO Kevin Nordt said nuclear energy offers one of the best, lowest cost options to serve its growing communities in a statement released at the time.

“The electricity generated by a Xe-100, and other advanced nuclear energy technologies, will be invaluable to our future carbon-free grid.”

The Xe-100 operates with high temperature gas and is designed to scale up and down without the potential for meltdowns. The plant is fueled by X-energy’s own fuel, which is produced with 15.5% enriched uranium – far above the current generation of nuclear power.

The physics are complex, but at its core, as temperatures rise, the reactor level drops, making meltdowns impossible, according to Sell. In a worst-case scenario, if the core heats up, the reaction shuts off. Heat dissipates into the ground.

X-energy’s pebble bed fuel is built with uranium (which will most likely be sourced from Russia) pellets the size of poppyseeds. The tiny pellets are layered within a ceramic shell that contains virtually all the waste. It takes 19,000 pellets held in a graphite matrix to make one fist-size pebble and 220,000 pebbles to fill the pebble bed.

Spent fuel remains one of the industry’s greatest challenges.

Sell, a former undersecretary of energy, said he is convinced the government will solve the challenge.

“It’s a political issue,” he said. “Whether it is Yucca Mountain or somewhere else, it will get solved. Until then, we can safely store fuel.”